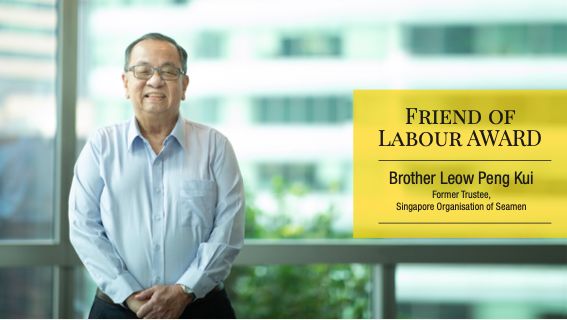 Peng Kui, a founding member of Singapore Organisation of Seamen (SOS), has served the Union as a faithful Trustee since May 1986; a position he held till he stepped down in 2019.

A veteran unionist, having worked in NTUC in different capacities for more than 33 years, Peng Kui’s insights on the Labour Movement has reinforced the growth and development of SOS. In critical strategic discussion, his wisdom and level-headed outlook brought robustness to the deliberation and decision-making process. One of his key achievements was safeguarding the Union’s interest by providing sound advice on investment of the Union’s funds. By upholding integrity and strong ethical convictions, Peng Kui’s value driven leadership has been exemplary.

Known for his ability to connect with workers from all walks of life, Peng Kui’s heart for SOS members’ welfare has made a difference in the way the Union serves its members.